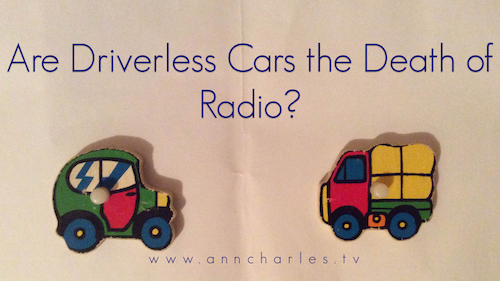 Driverless cars are causing a bit of a panic in the radio industry right now.

New technology means that it may soon be commonplace to be in a car without having to drive.

There’s speculation and fear that it means drivers won’t listen to radio anymore, as they will prefer looking at screens instead.

In this week’s video, I argue that losing audience may be a good thing, and you don’t need to worry about people abandoning radio – unless you deserve it.

Are driverless cars going to be the death of the radio industry?

Hello, my name’s Ann Charles, I’m from anncharles.tv and I do lots of production and technology things in the world of radio and love every moment.

Today I want to talk to you about driverless cars.

Now, I don’t know if you’ve heard, there’s been quite a lot of discussion in the industry recently, because cars are coming along and you don’t need to drive them anymore.

And people are getting really really worried about this, because, as we know, a lot of our listening – about 30% roughly* – takes place in the car.

There is a fear that as soon as people are able to take their eyes off the road and they can do what they like in the car that they’re going to abandon radio and abandon audio, reach for their video instead and go,

“Hurrah! At last! I can watch things. And not watch any vehicles.”

And you know no one will listen to radio anymore, everyone who works in radio will be out of a job, we’ll all starve to death and it will be awful.

So that’s kind of where we are at the moment and what I really to say today is guys, chill out, it’s OK, it’s OK, we can get through this.

So firstly, when it comes to listening in cars, yes it’s great to be aware that there is a new technology, and I’m very grateful that people are keeping their eyes on this and they’re thinking about how it’s going to affect our industry.

We’ve already been doing quite a lot of work in that area, especially in the UK, as people are moving over to DAB, encouraging manufacturers to ensure that radio is still available in the car, doing work on the Connected Dashboard to make sure it’s still coming up as an option, there are people who are ensuring that radio apps are very easy to use in cars and that is all brilliant: keep going guys, awesome work!

So technologies change, and there’s always been things that have been coming along that have been seen as a “threat” to radio and it’s good to be aware of them.

However, I do think that we don’t need to worry quite so much.

Now firstly, driverless cars are still quite a new technology and even if they were commercially and easily available today, it wouldn’t stop the fact that most people are still going to drive their normal car with their normal bits of technology for the next few years at least, so this isn’t going to be something that I think is going to overnight to destroy everyone.

Secondly, and more importantly I think, we need to stop worrying and having so much fear around the idea that people are going to abandon us because as broadcasters and radio-makers, do we really really only want an audience that is listening to us because they have no choice and they feel trapped in a car, and there is a hundred other things in the world they’d rather be doing but they are grudgingly listening to the radio because they’ve got no option?

Make radio that makes you proud

Because seriously, we’re not making great content and we’re not standing by our content very well if we’re worried that as soon as they don’t have to drive, that they’re going to go,

“Oh, thank goodness! I don’t have to listen to this rubbish anymore!”

turn it off, and reach for a book or their tablet or whatever they’re going to do because they’d much rather do anything else than listen to us.

We should be doing better, and we should be aiming to engage our audience and have people who really want to hear us as their first choice.

And I’m kind of cool with the fact that a few people, when given the chance, aren’t going to listen anymore – that’s fine.

Love the listeners who love you

But the ones who are going to stay are going to be choosing to listen because maybe they enjoy looking at the view and listening to something rather than looking down at a screen or a book.

‘Cos maybe that gives them motion sickness.

You know, like, I know it’s a bit unicorns and fairies but are you seriously trying to say that the only people who are listening to you are doing so because they would rather do something else but you’re the best of a poor selection?

Is that really really why you went into radio?

Because you wanted to broadcast to people who are like,

“Oh, suppose I can listen to this, there’s nothing else to do…”?

Really? I don’t think so!

So let’s just be proud of the content that we’ve got.

When people are commuting, and tablets have become more common on the train journeys, for example.

And radio reception can be quite hard on the train.

Let’s see the challenge of a driverless car as being a creative thing.

What can we do, what can you do on your programme or in the way that you’re producing audio that means in the world of driverless cars, you can still have people engaging with your programme?

I don’t know maybe you have to come up with some way of hacking into the car systems so that they all drive right past your transmitter [JOKE]?

I don’t know. There are are so many things, we’re creative people… we can probably come up with a way of making this work to our advantage, rather than stressing about it.

It’s probably all going to be fine

So really want I want to say, is: be aware that this technology is coming, but stop worrying about it.

Be proud of the content you make, and connect with the audience who actually wants to hear you, and wants to be part of your show and wants to make you a part of their day, because those are the people you want to treasure anyway.

And worrying about an exodus of numbers of people who didn’t really want to be there to start with?

That’s coming from a real place of fear.

Enjoy the time we have left

If I have got this entirely wrong, and driverless cars do mean that it’s the end of the industry as we know it and in the next 10 years that’s it, we’ve all got to pack up and go home because there’s no point in even trying to make radio anymore…

Then, you know, I’m sorry, but we might as well enjoy the time that we’ve got left.

If this really, really is this big thing that’s going to ruin everything for everyone, let’s not spend our last few years worrying about it.

Let’s crack on, making amazing content that we’re really proud of and we enjoy doing and that our audiences love, because isn’t that why we’re in this industry to start with?

It’s not just about radio

And also, finally, you know, spare a thought for our colleagues who are driving instructors you know I haven’t seen much panic in the driving instructing industry at the moment about driverless cars but you know I’m sure they’ll be just as worried by the idea that no one will need to do a driving test anymore.

And although I’m sure that they probably tell people not to listen to the radio while they’re driving because they should be concentrating on the road ahead, I’m sure they’re just as worried as we are.

What do you think?

Anyway, what do you think? Let me know, if you liked this video, just give it a ‘Like’ and a share, and hop on over to anncharles.tv

and pop me a comment, it’ll be down there somewhere, let me know what you think.

Are driverless cars a huge threat to the industry, is this keeping you awake at night, are you worried that all of your listeners are going to disappear?

Or do you see this as a creative challenge and a way to weed out the people who didn’t want to be there anyway and to give you audience who really really values what you do?

Let me know, I’d love to hear from you.

Thanks very much, and drive safely.

*This varies widely by time of day and country, so not an exact figure. Most radio listening takes place at home. However, the car is still a significant location.

Liked this post? Sign up for updates - It's FREE!
← Why I am excited about TechCon 2015
Here’s the Christmas Day news… →

One Response to Are Driverless Cars the Death of Radio?